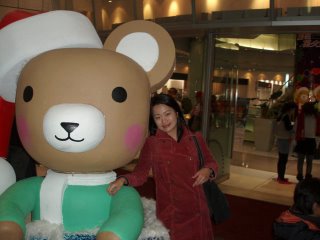 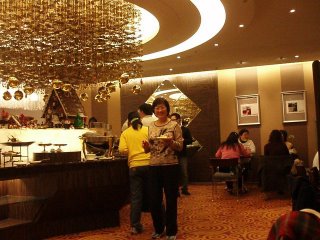 So, for Christmas Day Brunch I went out with Connie, her mother (pictured here), her Brother Li-Wei and her brother’s girlfriend Yu-Mei for a nice Chinese buffet. They weren’t serving turkey and mashed potatoes, but they did serve some great desserts, so I was quite happy and full afterwards. Boxing Day is also Connie’s brother’s birthday (poor guy), so this was really more of a birthday brunch, but it also served as Christmas brunch as well. Afterwards Li-Wei and Yu-Mei parted ways with us, and Conne, her mother and I went off to see the historic Long Shan temple, Taiwan’s oldest temple. 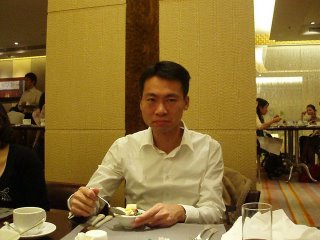 Here’s Li-Wei, looking stylish with his new haircut and ready to turn 31 and start a new stage of his life. I wish him luck in the new year, he’s got a big year ahead of him with his research project. 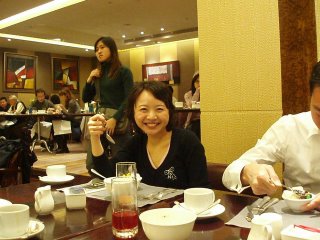 This lovely lady is Yu-Mei, Li-Wei’s charming girlfriend and a local dentist. (My dentist here in Taipei, in fact!) A bubbling, smiling and happy person. 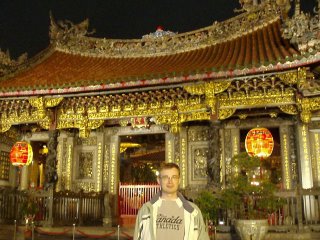 So, I just got done reading a fascinating article from the UK’s Guardian newspaper which took an interesting stand on “free trade” practices. To sum up, the article was about how so far no developing country has actually made sigificant profits from opening their borders to “free trade” and the “global economy”. In fact, it’s quite the opposite. Countries like Mexico, and the ones in Africa and Latin America which have privatized their industries and opened their borders to trade have seen minimal growth at best since they did so. Whereas countries like Vietnam which have sat behind high trade barriers (you can buy our goods cheap, but we’re protecting our local economy by taxing the hell out of stuff coming into the country) have actually seen large economic growth (6% per year as opposed to Mexico’s 1%) and reductions in poverty and overall standards of living. Other success stories include Taiwan and South Korea, which created economies focussed on exports, with import limits and government subsidies for their chosen exports. Their economies, which were “third world” a few decades ago shot through the roof with this approach, and China is using a version of it now to drive it’s own economy.

So, I guess the question becomes, who really profits from “Free Trade”? Is it the little guy? I think not. Opening borders to trade is wonderful for the big guy, he gets lots of cheap stuff and new markets for his goods, but for the little guy who can’t compete it means crushed local industries and people with no jobs. How exactly does that improve their standard of life? I suppose some might say they can find work in the service industry and export industries, but that’s what the Mexicans have done, and where has it gotten them? 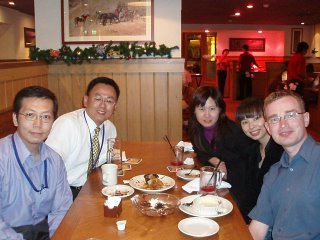 After class last Wednesday, Mr. Lien and his crack team of lawyers went with yours truely on a field trip to the Outback Steakhouse. I’d previously mentioned Outback as a good place to go during another class, and so when Mr. Lien suggested we go out to dinner the choice of where to go was obvious. They loved the “Bloomin’ Onion”, and greatly enjoyed a nice Australian Steak dinner. Actually, there isn’t much choice because the only steak allowed across the border into Taiwan is from New Zealand or Australia, pretty much all other steak is banned. Mr. Lien and Robert (in white and blue on the left, respectively) asked me to go out to a bar with them sometime in the future. I think they just want an excuse to their wives to go out for a night on the town. “Honey, we have to go. We need to show the foreigner the Taipei nightlife.” I actually like this bunch a lot, they’re all very smart (obviously) and it’s amazing how fast they learn, especially Jasmine (sitting next to me), who just seems to absorb English in class almost instantly. One of my favorite classes by far. 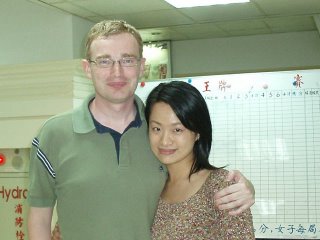 Last Saturday Connie, her friend Monica, and myself went to California Fitness Center to sign up in an effort to defeat the coming winter blahs. Afterwards to celebrate we went out to dinner and then following a visit to a coffee shop we headed to a local Bowling Alley which was nearby and which I’d seen from the bus many times. I’ve wanted to go bowling since I came here, but the opportunity never presented itself until last weekend. 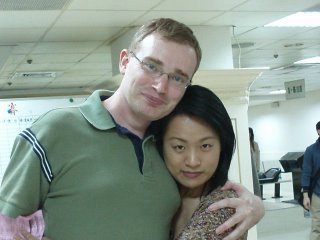 “If you touch my Rob….I will kill you.” Connie shows off her firey latina look. 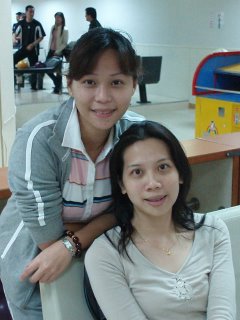 Monica (left) is Connie’s old friend, and current boss. The other lovely lady is her friend Narisa who dropped by to join us for a night of fun.