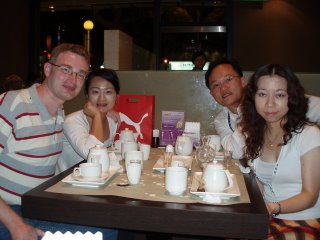 A few weeks ago my friend (and former student) Chalk (the smiling guy in the back) called me up and asked if Connie and I would like to go for dinner. Of course we accepted since Chaulk is one of the nicest guys I know here in Taiwan. He took us to what would best be called a Japanese-Style Steakhouse, where the focus was beef, but it was part of a long multi-course meal of light soups, salads and side-dishes, all of which were equisitely delicious. ( I would go there again in a second, and in fact did go there again 2 weeks later with Connie’s family, but was too sick to appreciate it at the time.)

We were both catching up (since I hadn’t seen Chalk in almost 5 months) and celebrating his new job at a local Biotech firm. Unfortunately his wife, Sunny is newly pregnant and can’t be far from a bathroom at any given time, so she couldn’t attend. In her place the woman next to Chalk is Sharon Lo, a lovely lady who Chalk introduced me to about 5 months previously and who has since become a good friend of mine as well.

Chalk invited us to come and see his family farm at some point in the future (he grew up on a farm) and Connie and I said we’d be delighted to. So hopefully we’ll have pictures of Connie being a farmgirl to put up here in the near future!

3 thoughts on “A Lovely Dinner”