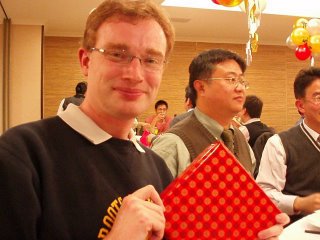 It’s customary at Taiwanese year-end/new year company parties to have contests and draws for prizes for the company employees as a way of thanking them for their hard work. The really big prizes were drawn for (Rob wasn’t in the draw since I’m just an honorary employee) and then we played Bingo for small prizes (which I was included in). As you can see, I was one of the winners at the first round of Bingo! (It was a box of potato chips.) Later in the evening (once they’d gotten everyone liquored up) they played a game where randomly chosen people had a balloon on their lap and their partner had to sit down and break it for a prize. They also had a game where the men carried women on their back and jousted, but I was too busy eating to pay much attention to that one. Taiwanese love their party games!