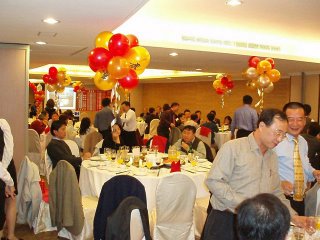 Ours was one of perhaps six or seven party rooms on the second floor which are primarily rented out to wedding parties. The staff were very professional, and everything was done so smoothly you barely noticed them flitting around. There were about 9 tables at the party, each filled with mostly engineers and salesmen from across Taiwan. Connie and I ended up sitting with a group of people mostly from TaiZhong (in the middle of Taiwan) who were very nice, but didn’t talk much. I didn’t even know that they understood English until later in the evening when enough wine had been flowing to make them relax enough to talk to me. Of course, by that point Rob had been drinking toasts to everyone, and was quite toasty himself too!