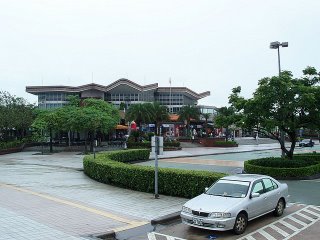 So, after zipping along the road for half an hour, we came to this highway rest-stop where we could have breakfast and give the drivers a chance to relax. The stop was filled with cool little shops selling gift snacks and tourist trinkets, I nearly bought a very cool Three Kingdoms chess set, but Connie said I could find it cheaper in Taipei, so I held off. It was also because I couldn’t choose between the Chinese Chess set and the western Chess set, the Chinese Chess one had nicer figures, but I don’t know how to play it! 🙁