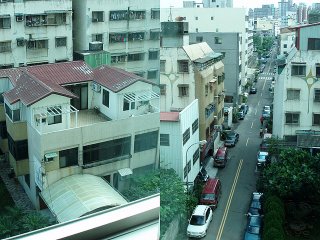 While we were in TaiChung, I remembered that my camera had a split-screen picture mode, so I stuck my head out the hotel window Sunday morning after breakfast and took these shots of the city next to the hotel. A nifty effect, and it lets you have a more detailed impression of what TaiChung looks like. Actually, the key differences between TaiChung and TaiPei are that the streets are wider here, and the buildings are lower, only averaging 4 storeys or so compared with Taipei’s 6 storey or higher buildings. It was weird to be in the city and be able to see the sky! It made me realize just how used to Taipei’s urban canyons I have become.

After this, we bundled into the cars and took off for our final destination of the Ching Jing Farms!