Grab Mary Jane and prepare to ride the Galaxy Express! We’re going back to the 70’s!

As many may know, I’m a huge Giant Monster fan, and today I discovered that one of my favorite blogs, Giant Monsters Attack!, has been reborn on Tumblr as Daikaiju Sushi after being dormant for a while. Check it out for all sorts of new and fun giant monster goodness!

My first Godzilla movie was Godzilla vs. Megalon. I was seven, and caught it while turning the dial one way on the 13” TV we had. There, on that small screen, was the biggest, coolest monster that I’d ever seen, and even seeing him in those modest circumstances didn’t blunt the power of the King of the Monsters.

I was in love.

And it would be a lifelong love affair, one that would see me glued to the TV every Saturday afternoon when Superhost or Channel 43’s Weekend Movie would run one of a dozen Godzilla films or anything else that had a giant monster in it. Godzilla was as important a part of my childhood as Star Trek, Star Wars, or Spiderman, and to call him one of my idols wouldn’t be an exaggeration. I even created a crude stick-figure comic about a guy who could transform into Godzilla and battle evil monsters to save the world. (Little did I know guys turning into monstrous superheroes was a Japanese standard even then, and I never got to see Ultraman until I was in my twenties.)

As you might expect, I was super excited to finally see a proper American Godzilla film that didn’t star a giant iguana, and was waiting with baited breath for its release in hopes that this would be the giant monster film I’d always wanted to see. After last year’s Pacific Rim, I was especially hopeful based on how well that film had handled Kaiju (even if they sucked at marketing it) and when I saw the Godzilla trailers, any skepticism turned into outright enthusiasm. This was going to be THE Godzilla film (besides the 1953 original), I was sure of it, and wasted no time in rushing to the theatre today to check it out.

I’d argue Godzilla is really two films, and the half which actually stars the King of the Monsters is indeed amazing and a worthy tribute to the name. The problem is, it’s paired with another completely lackluster human story that is right up there with watching paint dry and the clock tick during the last five minutes of class.

(mild spoilers from this point on)

So, here’s the thing. When you write a story, you have this little thing called a Plot Arc. It’s a writing term for the journey your character goes on, and the changes the lead character(s) experience in their lives as they go through that journey. Watching them go on that journey and undergo that change is what makes a story fulfilling and interesting to a viewer. This story can be mental, physical, emotional or spiritual, but it’s essential to making a compelling story that the audience wants to watch.

The problem with the human story in Godzilla is that the Plot Arc of the human characters isn’t an Arc, or a hill, it’s a straight desert road leading from A to B with few gentle curves, much less a hill or even a corner. The human characters are literally just there to stand around and watch events happen, and the only character who is actually trying to go on a personal journey dies about twenty minutes in. I mean they literally kill the only guy with a goal or plot or anything to prove twenty or so minutes into a 123 minute film. After that, the only ones on a journey are the monsters, not the humans.

In theory, the lead character Lt. Ford Brody (yeah, they named the lead after Harrison Ford and Sherriff Brody from JAWS), has a shit tonne of goals and things to deal with. He loses his father (who everyone thought was nuts), he’s trying to get back to his family, he’s trying to rescue his wife, and he has every reason to want that fricken MUTO dead! He’s got so much to prove and do that he could fill a couple films worth of story.

And they do nothing with it. Not a thing.

So instead of a driven lead who’s just trying to get through the worst days of his life, we get a guy who’s so calm he makes the Dalai Lama look like Jim Carey. Seriously, this guy literally just walks through the film, and shows very little emotion or concern. He does what he needs to do in the situations where he needs to do stuff, and then continues on little a little toy robot.

They couldn’t make a more boring lead if they tried, and the actor they have playing him doesn’t add anything to the story. Hell, he makes me long for Shia LaBoef’s character from the Transformer films, and I hated that character, but he at least WANTED something.

Almost (but not quite) every scene in that film with Ford Brody, or his wife, or his kid, was a waste of the audience’s time. He’s like a piece of the plot that just wanders through the film to give us a viewpoint, and he’s so wooden I’m shocked his wife didn’t get splinters during the romantic scenes. Oh, and speaking of his wife, she has no arc or wants either (except to see her husband), nor do any of the other characters. Even Dr. Serizawa isn’t trying to prove anything- he knows about Godzilla, and the MUTOS, and is pretty much there for just narration.

Nobody in this film wants anything, except to stop the monsters, but they stop themselves, and would have done so just fine without the humans lifting a finger. So why exactly are the people there at all?

Here’s the thing. If you removed Ford Brody from 90% of the scenes he’s in, this film wouldn’t change, and might very well improve due to getting to the point faster.That alone tells you how well written the film is.

And this, is why I say there are two films here.

There is an amazing spectacle of a giant monster film with fantastic visuals and exciting action, and there is a leaden weight of a human story about a guy travelling from A to B who just happens to be everywhere where important stuff is going on- just ‘cause he’s the middle of the plot.

I loved the Godzilla half of the film, they did an amazing job of giving Godzilla Delux (as the Japanese are calling him due to his sudden weight gain) real presence, and wish there was more of it. It’s the tacked-on ultra-boring Ford Brody GI Joe story that left me cold. (Hell, he’s even carrying around a GI Joe figure, in case we missed the reference! Subtle, guys!)

If you want to see some fantastic giant monster films, and haven’t see them, go check out the Shusuke Kaneko’s Gamera Trilogy from the 1990’s. This film borrowed a lot of its approach to monster stuff from those films, but forgot to import the humanity that made them so endearing. Too bad. Big G will always be my favorite monster, but Gamera sadly has the better films. 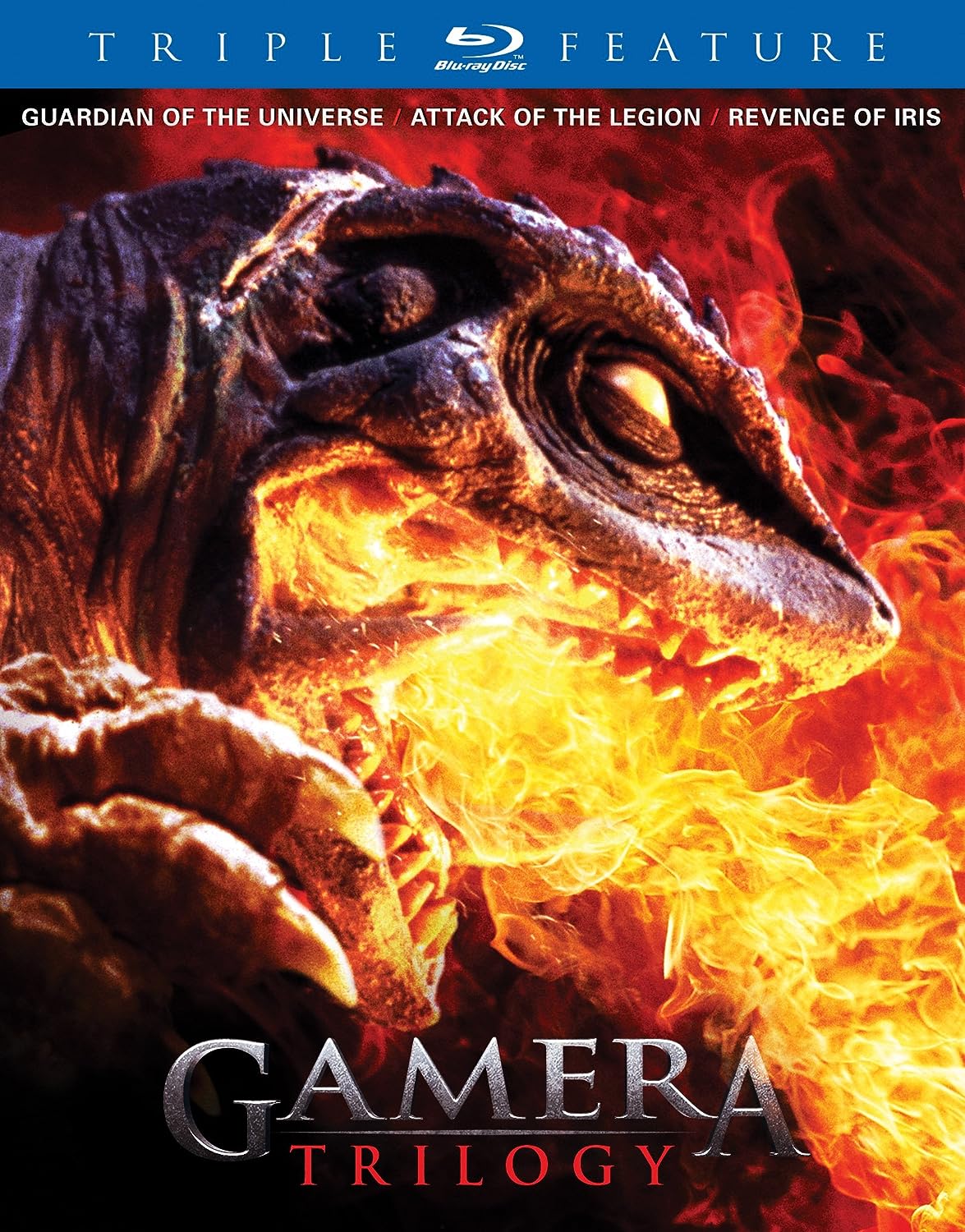 Devo is back, and they brought giant monsters with them!

This looks like awesome dipped in soy sauce. I really hope it gets made!

via Monster Roll on Vimeo. The Words Get Stuck in My Throat from War of the Gargantuas (Oh, the irony!)

Beware of THE BLOB! (This one’s been stuck in my head since I was a kid!)

Hail to the King, baby!

This is probably the best 60’s monster movie theme ever! GREEN SLIME!

Ahh, I love old horror hosts. I grew up on Elvira, Superhost from Cleveland (WUAB!) and of course MST3K. This video from the Internet Archive (courtesy Bill Hollweg) is the New Orleans Horror host Doctor Morgus presenting Godzilla. So pop up the corn, grab some sodas and sit down to enjoy (complete with 80’s commercials!) Morgus and the King of the Monsters! Mysterious Pants leads us through the world of Kaiju posters that did their job a little too well! It kind’ve reminds me of those Polish monster movie posters, although those were done that way for artistic purposes.