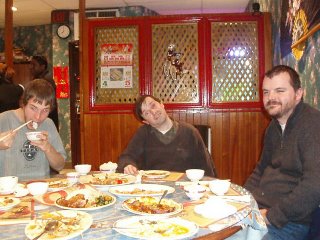 To the left of the picture in the grey shirt you will see “Little” Mike Horsepool, the organizer of this reunion party and an all around cool guy. Horsepool and I have known each other since I came back from Japan, and now gamed together for many years. He’s smart, clever (sometimes too clever for his own good), opinionated, and never boring. His long-range goal is to get into the army and get shipped off to someplace to get shot at, I don’t know why, he just seems to like punishment.

In the middle of this picture, the man doing the cartoon face is Mike Armstrong, aka “Big” Mike. Mike and I have known each other for a while, and worked together to run Anime London for many years, a local Anime Club to promote Japanese animation in London. I started the club back before Anime was popular, and after a few meetings Mike showed up, and the rest, as they say, is history. Mike is a really clever and good hearted guy who cares a lot about people and is always trying to help out good causes. (When not chasing Cosplay girls with a camera….)