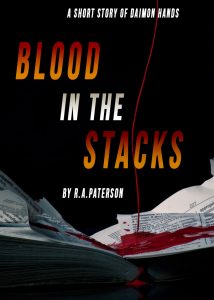 The gun that was shoved in Daimon Hands’ face was a 9mm Glock, the kind you buy at a gun show to have, but nobody ever uses. That told Hands that this wasn’t a professional job, but then what kind of professional robs a bookstore?

“You!” Shouted the masked man with the gun. “Get over there!” He waved Hands towards the knot of people gathered in the bookstore’s front check-out area.

Hands raised his palms in a submission pose. “No problem,” he said, backing away toward the other patrons.

“There anybody else in the store?!?” Yelled the gunman, a stocky broad shouldered guy wearing a flimsy red rubber skull mask that covered his whole head but left his white throat showing. Based on voice, Daimon guessed he was in his twenties or early thirties, and he moved in the clumsy way of someone who hadn’t seen exercise in a long time.

The skinny man he’d pointed to shook his head. “N-no, man! T-this is everyone! I swear!”

Satisfied, the gunman nodded to himself and looked around. “‘Kay.” He said, clearly thinking about what to do next.

This surprised Hands a bit. If this was a robbery, the thing to do next was to empty the till, maybe have one of the three employees open the safe for him. That was why he was here, wasn’t it? Theatre of Books, Chicago’s largest used book store, was having its closing day sale, and the cash register made a tempting target. This guy was after the money. It was all so simple.

So why was the loser in front of them thinking?

What was there to think about?

Pick a partner? Thought Hands. What was this guy’s game?

The skinny guy, the one who the gunman had threatened earlier, was beside Hands, and he looked up at him. “I’m sticking with you, if that’s okay?”

Hands gave a noncommittal shrug that could be interpreted the way the guy wanted.

This wasn’t exactly a surprise. Most people had two reactions to Daimon Hands when they first saw him- they either stuck real close or got as far away from him as they could. Hands was six foot four, weighed two hundred and forty pounds, and had muscles that made his dark skin look like it was going to pop at any second. He wasn’t ugly by any means, but had an intimidating air about him that made most people stop and ask themselves if they really wanted to bother this person. Of course, in a crisis, this also made Hands the first person most people gravitated towards.

Once everyone had paired up, the gunman gestured towards a pair of girls who were trying to look as small as they could towards the back- “You two! Get everyone’s phones and put them right here.” He tapped the counter-top. “I’m gonna check, and if anyone doesn’t hand over their phone, I swear to god I’m gonna shoot them right now.”

Nervously, the girls began to gather the phones. When they got to Daimon, he shrugged. “Don’t got one.” He said. Then, when the girl gave him a pleading look, he repeated. “Really. I don’t carry a phone.”

So the girl nodded and moved on, then joined the other one in dumping her armload of phones to clatter on the plastic counter-top.

“‘Kay! You two, sit right there!” The gunman said to the scared teens, gesturing to a spot in front of the check-out counter. The girls did as they were told.

Then he looked at the rest of the people, taking a moment to count the pairs off. “…Seven…Eight…Okay. So listen up. Here’s what you’re gonna do. I want you all to go through this bookstore and find me every copy of a book by Stephen King. You’re gonna gather them up and put them in a pile right here.” He pointed at the open space in front of the check out counter. “Got it?”

This guy’s a nut, thought Hands. God. I’m locked up in here with a certified psycho with a gun.

From the murmuring of the people around him, Hands could tell the rest of the people there were thinking the same thing, and for a moment, he saw indecision flash through the gunman’s posture. Then it was replaced by anger.

“Hey! I’m not fooling around here!” He yelled, then Hands’ breath caught as the gunman leveled his weapon at one of the two young girls next to him. “You do it, or I start shooting. And, if any of try anything, I’m going to shoot them too, so you’d better do what I say! No calling out. No trying to run away. One person leaves, I shoot the other. And remember,” he gestured at the bank of fuzzy old black and white monitors behind the counter. “I can see your shit. You got me?”

“Umm…” Said an older grandmotherly woman to Hands’ left. “What Stephen King book are you looking for? Maybe we can find it easier if…”

“Shut up!” The gun was now aimed at her. “I said I want you to bring me every Stephen King book you can find. I want all of them. And…” He pulled a broken plastic red egg-timer out of his pocket. “In one hour this thing’s gonna go off. And, if I don’t have a big pile of books here, I’m gonna shoot one of these girls.” He gave the timer a twist and slammed it down on top of the counter with a loud clang. “Now move!”

The crowd looked at each other, and then began to shuffle off, dispersing to the shelves.

“C’mon,” said the skinny guy with Hands. “We’d better go.” But, as soon as they were in the stacks and out of the gunman’s view, he began to rush forward and waved Hands to follow. “Hurry up! We gotta get to the fire door at the back.”

Hands nodded. That was the first thing he’d thought of as well.

9/11 had changed Americans. There was a time when people obediently did as they were told in hostage situations, confident that if they just played along they’d get out okay. The hostage takers wanted to live. They wanted to live. People figured that their safest bet was waiting it out and hoping that it was all going to turn out okay. Not anymore. Now people assumed that every hostage taker was going to get themselves and the hostages killed, and their natural reaction was to get as far away from ground zero as possible.

So it was no surprise that Hands and his companion found most of the other patrons were moving in the same direction- everyone following the emergency exit signs. Sure those girls were hostages, but there was no way they were staying if they could help it. That was something to be left for the police hostage rescue team.

But something bothered Hands- If it was such an obvious thing to do, why hadn’t the masked guy told them to stay away from it? Was he just relying on their concern for those girls to keep them here? Why hadn’t he warned them off from trying to use the exit to escape?

Hands grabbed his shoulder and pulled him to a stop.

“What?” Said the other man, giving Hands a shocked expression. “Hey man, what’re you doing?”

“Hold it,” said Hands, gently pushing the man to the side. Then he leaned down and examined the fire door’s push mechanism. The door was red and ancient, probably dating back to when the building had housed a theatre, and Hands let his eyes run across the metal push bar and the mechanism it was attached to.

When he’d finished, most of the other patrons were behind him and asking what the hold-up was.

“C’mon man, out of the way! We gotta get out of here!” Said the skinny guy.

“Just making sure,” said Hands. “He might have rigged something up.”

That made the rest of them pause. “Does it look okay?” Asked another man.

Hands stepped to the side, moving so if there was any funny business the doorframe would probably shield him from it. “You first,” he told the skinny guy.

Without hesitation, the skinny guy stepped forward again and shoved the handle.

It depressed, there was a click as the latch was withdrawn.

Not a fire alarm, which big letters above the door said would sound if the door was opened.

Not an explosion or other trap.

Not a door opening.

The door stayed firmly where it was.

“It’s stuck,” said someone from the group, and others stepped forward to give it a shove.

But the door stayed where it was.

Blood in the Stacks (Part 2)