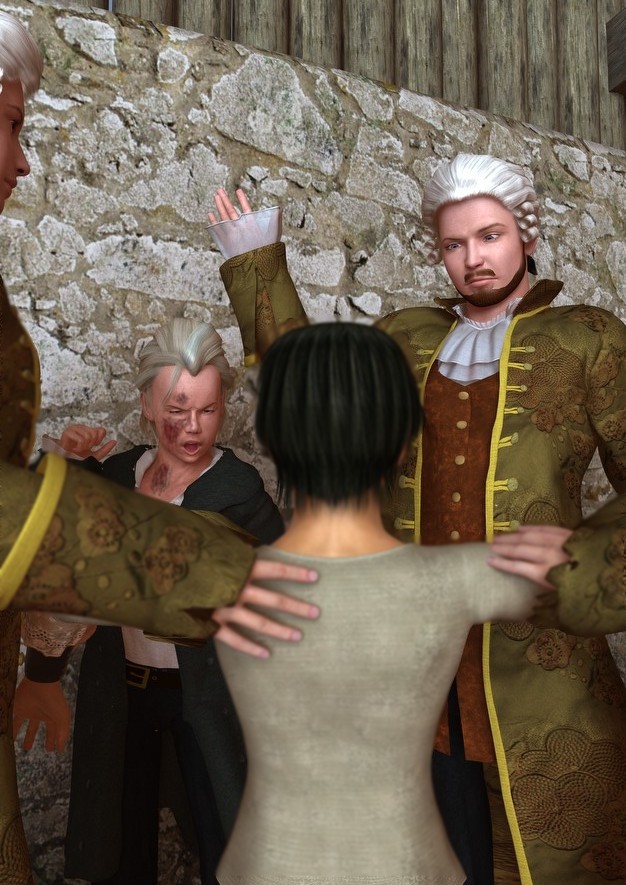 The three men were reluctant to beat a nine year old girl, but they had their orders.

As their young master, Marlon Wiese, watched, two of them went for her arms, holding her in place so the third could do the actual dirty work.

They had no trouble getting a hold of her as they had her trapped in the alleyway, and she offered no real resistance. Not even a yell for help or a scream escaped her lips- only a look of defiance that one didn’t expect from a child. But this one was a native, after all, so what could one expect? Normal rules didn’t apply.

As the leader of the three looked down at her, he wondered why she’d done this. Why she’d put herself into this situation. The girl had literally attacked his master, throwing clumps of horse dung at the young aristocrat as he’d passed through town. Did she bear him a grudge? Or was she another child of the poor showing contempt for her betters and acting out?

No matter, he had a job to do.

“Grit your teeth, kid.” Whispered the lead servant to the girl he loomed over. “It’ll make it easier.”

His attempt at kindness was greeted with only a fierce glare from the girl and a berating from his young master to hurry it up.

So, he shrugged his shoulders and hit her.

He went lightly at first, slapping her open-handedly.

But this was not enough for the young master.

“Hit her harder. Use your fist.”

And so he did. Five times.

Still, she only glared at them from behind her bloody face.

The servant hesitated. “Young Master, the child may not speak French.”

“Doesn’t matter.” Marlon said with a toothy grin. “Begging is begging in any language. I’ve heard father’s native slaves beg as Big Harrod puts them to the lash. I’ll tell you when to stop.”

“Young master, we don’t know who she belongs to.” The lead servant protested. “If we kill her there could be trouble.”

“What trouble could there be? She soiled my clothes and my honour. Is there a punishment she does not deserve?” Then, seeing his man still hesitate, the young Aristo growled. “Do it!”

“Oui.” Nodded the servant. He started to pull off his belt, and gestured for the others to turn the child around.

He hoped under the taste of the belt that the child would cry soon, for he had no desire to see how far this might go.

“Start with twenty,” said Marlon excitedly, walking around to see her face as the whipping began.

The child, barely younger than Marlon himself, only grunted with each lash.

“Do you know your place yet, girl?” Marlon yanked her head up by the hair, watching her expression as the final lash of the set came.

Fierce eyes looked back at him, and then she spit in his face.

As blood and spittle ran down his cheek, Marlon’s expression changed from playful to hard.

“Give her forty more.”

“Forty. I will see this little whore cry if it takes all day. By my count!”

The girl’s thin shirt was bloody after ten.

She passed out after twenty-six.

“Sir, it’s already past mid-day. We are already late. Can this not be enough punishment?”

Marlon paused, looking up at the sky above them. Considering.

Then he turned and punched the unconscious girl in the face- hard. The alley was filled with the sound of breaking bone.

“My honour is satisfied.” He declared as he wiped the blood from his fist with a lace handkerchief. “Let’s go.”

At a gesture from their leader, the servants dropped the child’s broken form in the mud and filth, and turned to follow their master. Only the lead servant paused a moment, making the sign of the cross and whispering a silent prayer for the girl.

Then he too left her to die.

Renard woke up three days later in her own bed.

There was not a part of her that didn’t hurt, and one of her eyes was still swollen shut.

“Father…” She rasped, looking up at the man who sat next to the bed, whittling.

“I see you are awake, foolish girl.” Gerard la Russo commented, laying down his knife and the half-carved block of wood. “God’s grace! It was a near thing. The doctors even wanted to bleed you, but I told them you had already bled enough for three.”

“K-Katha…Katha…” She began, unable to get the words out past her swollen tongue.

“Katharine Moreau? Your friend? Yes, her father is still alive.” He sighed. “You must be very proud of yourself. Young Marlon didn’t arrive in time to testify at the trial, so the judge used it as an excuse to let Monsieur Moreau free with only a fine. Foolish man, I hope he learns not to poach from Wiese family stock again, no matter how hungry his family may be.” Then he stood up and walked over to open the curtains and let the sunlight and fresh air in. “Still, he didn’t deserve the death sentence they were demanding, so there is something to be said for your loyalty, if not your senses.”

“Sorry.” She said, but inside she couldn’t help feeling relief, even jubilation.

“When you are better, your chores are doubled. You’re also not to leave the farm until the end of the season- I expect young master Wiese will remember the girl who delayed him and there will be trouble again because of it. When he comes looking, your Uncles and I will handle it- not you. Am I clear?”

“My brave girl, what am I going to do with you?” He said in a softened tone, kissing her on the forehead. “Wear your scars well, you’ve earned them.”