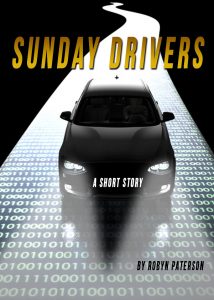 This week on KFAT fiction, we have a visit to the Twilight Zone. In a not too distant future, an auto insurance investigator loses his job to the driverless car revolution, but when he’s offered a new job it might just turn out to be his last. Can he keep himself from becoming just another Sunday Driver?

Lots of kids have nightmares about being buried alive.

You wake up and you’re in a tight, dark enclosed space. The air inside is stale and hot and you can barely move. You scream. You make as much noise as possible, hoping that someone is going to hear you.

But nobody does, because nobody can.

I’m going to tell you the story of how I got buried alive at 120 mph.

It starts with 14 words.

Come see me in my office when you have the time.

Bill was my boss at Trueblue Auto Insurance, and his office was at the end of a nearly empty cubicle farm. I barely had time to read it when Hadley from security showed up next to my desk. He gave me an apologetic look, but I just nodded and grabbed my coat. I wasn’t going to make a fuss, there was no point. He was just doing his job, like I’d done mine.

Bill was as apologetic as he could be, but he too was just doing his job.

“It’s just the way things are, John,” he said. “Nobody’s buying cars anymore. Hell, why should they? They can just use those damn apps on their phones and some Cloud Car will show up and take them to wherever they want to go just like that.”

It had been coming for years.

First a few driverless cars on the road, then once the Cloud Car services like Uber caught on and people realized they didn’t need to pay for insurance, or gas, or maintenance, the bottom fell out of the whole industry. Why pay for that crap when you could let someone else handle it?

Like an idiot, I thought there’d still be a need for insurance investigators- after all, people still had accidents, right?

But then the new legislation came in- no more human drivers. Things reached the point where there were so many driverless cars on the road that the only ones having accidents were humans. So they solved that too.

Now, there I was.

“Of course, there’ll be a severance package,” Bill continued. “You’re a good man, John. I hate to see you go, but you’ll bounce back, okay?”

I swallowed the bile in my throat and smiled. I shook his hand. Hadley escorted me from the building.

I wanted to torch the place, maybe it was good they stuck Hadley with me.

Instead I put out a location event alert on my G_Phone and invited everyone I knew to join me in getting drunk. Lots showed up. It wasn’t like they had jobs to worry about either.

America has 4.12 million miles of roads, it’s a country built around cars.

When you got 90% of the cars off the road, you got rid 90% of everything that went with them. Insurance. Car Loans. Auto Parts. Auto Plants. Parking Garages. Road Maintenance. Traffic Ticket fees. Gas and Oil Production. The DMV. City Parking Meters.

I was just another piece of hot, sticky roadkill.

Still, the bills came, because everyone was trying to get what money they could. And pretty soon I was having to decide between paying for my glorious one-room apartment on Detroit’s lower east side, water, power, Internet, or phone bill. I could have one or two, but I couldn’t have them all.

I have to admit, I was thinking about saying screw it and just ignoring them all, but the idea of being homeless didn’t fill me with wonder.

The problem was, the last thing anyone was looking to hire was an insurance investigator- we were a dime a dozen, and someone had dumped a hell of a lot of dimes on the pavement. I could try other jobs, but those took training, and training cost money, and what was it that I didn’t have? Severance only went so far, and hell, I couldn’t even work at McDonald’s, those had gone totally automated ten years  before.

Every time I saw that cute anime-type face on the ordering screen asking me if I wanted fries with that, I wanted to punch her- hard.

So, one night I drunk posted to my G_book page:

“Bill Deathmatch! Rent vs. Power! Who will win? You decide! Vote below!”

The usual bunch of joke replies, and a few posts showing serious worry followed, but then I got a Direct Message from one of my old high school buddies.

The truth was, I’d even forgotten I’d added him to my friend’s list.

But there his name was on my message bar: Eddy Saint.

“Hey man. You needing some cash?”

I wish to god that I’d ignored that message.