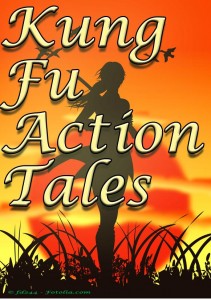 Hi everyone and welcome to the third episode of Kung Fu Action Tales, I’m your host Rob Paterson and I’m here to take you on a journey into the realms of Asia that might have been or never were. This week we’re experiencing a new realm in Asian adventure stories courtesy of author Winnie Khaw, who has kindly offered one her stories for our listening pleasure.

Winnie herself is a developing writer at the age of twenty-one, but hardly an inexperienced one, having had one of her original plays performed at an awards show while still in high school and having been accepted into the Orange County Playwright’s Alliance in 2008 for her adaptations of the Chinese classics The Love of the White Snake and The Butterfly Lovers. She also presented an original Chinese Fantasy Novella in 2009 at a California Honors Symposium held at Stanford University- not bad at all! I think we can expect to hear her name a lot more in the future as well, as she’s currently a junior creative writing major at Chapman University.

Winnie’s story, the Paper Dragon Breathes Fire, will be read tonight by Ty Konzak, who like last month’s Fiona Thraille has been one of the hearts of Kung Fu Action Theatre’s audio dramas over the years. Ty spends his days in his secret identity as a mild-mannered Oncology Technician in Fargo, North Dakota, but when the sun goes down and the moon is high he turns into the voice acting machine spoken of in reverent whispered tones we know today as Aramek. Ty has done more voices for KFAT than I can list, from his first roles as Malarek in D-Ranger and Rong Li the Master of Thunder in Little Gou’s adventure of the same name, to his recurring role as Kip in Twin Stars. Listening to Ty work the magic voice he developed over 3 years of radio has been one of my great pleasures when doing audio editing, and I never cease to be amazed by the variety of voices he can come up with. He says he loves to do villains and silly voices, but I have yet to hear anything Ty couldn’t pull off.

And this is why I chose Ty for tonight’s reading.

The Paper Dragon Breathes fire is a hard story to explain. My first thought would be to compare it to King Lear, and I think the Shakespeare analogy aptly fits Winnie’s incredibly dense and magically poetic style of writing in this story. But, there’s more to it than that. Winnie has captured the essence of a dynastic change, something that occurred frequently in Chinese history, and while such events are often times of triumph they are also equal parts tragedy caused by the all too mortal failings of man.
I must confess, when I first started to read Winnie’s story I was a little overwhelmed and not sure what to make of it, but as it went on it all began to make sense and I by the end I was touched by the elegance of the whole thing. Perhaps you will have a similar experience….enjoy!