The Eyes of a Warrior

When the Indian came to challenge Gerard La Russo, the Frenchman cursed and told him to leave. He had just gotten to his second bottle of wine for the day, and it wasn’t even noon yet. Too early for such nonsense.

Still, the Indian refused to move.

He was a tall sort- muscular, with skin the color of summer earth and eyes sharp and dark like coals. His head was shaved on either side, and what hair remained died the crimson red of the Fox tribe. He carried a short spear.

A warrior. A fighter.

The Indian paid him no mind. “We fight,” he said again in poor French.

He pointed the spear with its hide wrapped tip at Gerard.

The Frenchman slammed the front door to his cottage and returned to drinking.

When Gerard went to town that night, he asked around.

He learned that the Indian had come to Ville Marie a few days before with his wife and baby. He had challenged a few of the locals who fancied themselves fencers to fight, and when Luc’s boy Marcel had accepted the challenge, the Indian had whipped him soundly.

That alone put the Indian up a few notches in Gerard’s opinion- Marcel was a braggart and a bully.

French pride had made a few others accept the challenge, but none had been able to best the Indian and his short spear style of fighting.

At last, they had sent him to the former musketeer.

Still, Gerard considered, it had been a long time since he’d had a good match…

At dawn, the Indian came again.

This time, Gerard was waiting. Rapier hanging at his side.

He wasn’t much good with a spear, but a short spear like the Indian used was closer to a sword anyway. It would be a fair fight.

They didn’t talk, they didn’t need to. Both understood.

They started when the dew was on the grass.

They finished when the sun had risen high and it was too hot to continue.

Gerard was the victor.

Then Abooksigun left, and a thirsty Gerard wondering how much wine he had left.

The next day, Abooksigun came again.

After five minutes of fighting, Gerard stopped the duel.

What was that movement the Indian had just done- with his short spear? The Frenchmen wanted to know.

Abooksigun first showed, then taught him.

When this was understood, the battle resumed.

Shortly after, Abooksigun stopped the fight.

Would it not be better if he did- this? The Indian pantomimed.

Gerard had not considered that before, so they went through the movements until both were satisfied.

In this way, the two spent the day, fighting in fits and spurts.

They toasted Abooksigun’s victory with wine, and Gerard cursed his poor condition.

But, in his heart, he felt alive again.

On the third and fourth day, it was the same.

Each won and lost equally, and the time ended in a draw.

The sun shone, and the wine sat untouched- waiting.

On the seventh day, Gerard inquired in the city as to where the Indian was staying. The man at the general store told him a field just to the North of town. He’d sold the Indians some blankets a few days before, but hadn’t seen them since.

Gerard bought some wine and food, thanked him, and went on his way.

The Indian camp held the stench of death.

Angry blackflies buzzed around the tent’s open flap as Gerard approached and looked inside.

When his stomach was empty, he took down the tent rather than enter it. Abooksigun and his wife lay dead on the blankets- she wrapped in his cordlike arms. The fever had taken them, the summer heat and bugs had done the rest.

He stared at them for a time, not sure what to do or feel. He would need to bury them. He would get the priest and bury them. The man. The wife. The…

Where was the child?

The people in town had spoken of a child!

Pacing around the camp, La Russo began his search.

Had the child died first and been buried?

No. There was no grave and that was not the native custom.

It was not between them. Where was it?

He searched first the camp, then the field around.

At last, he found it.

Sitting in his cottage, Gerard La Russo did something he had not done in a very long time- he considered the future.

It was hard not to do so with a baby cradled in his arms.

The doctor said it was God’s Will that the baby was still alive. She showed no trace of the fever, and had been taking the mush Old Genevieve had taught him how to make well.

But now he had to consider what he would do with her.

She should find a new home. This cottage was no place for a child, and he was not the fatherly kind. Old Gennie had offered to send the child to live with her sister on the other side of town. They needed more hands for the fields. She could live a good life there.

But, as Gerard watched, the infant stirred.

Eyes dark like coals opened and looked up at him.

Not the eyes of a farmer.

The eyes of a warrior. 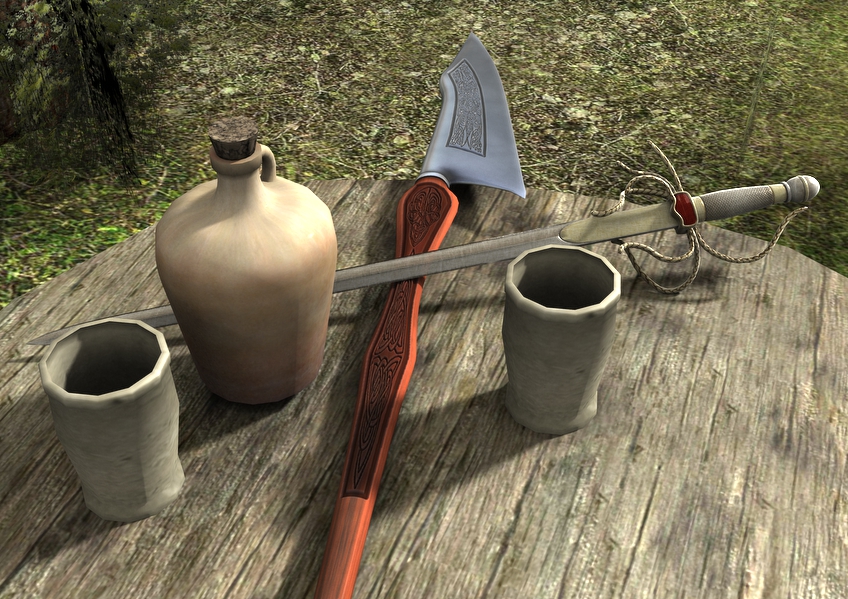 The Fox Cycle, Story One- The Musketeer