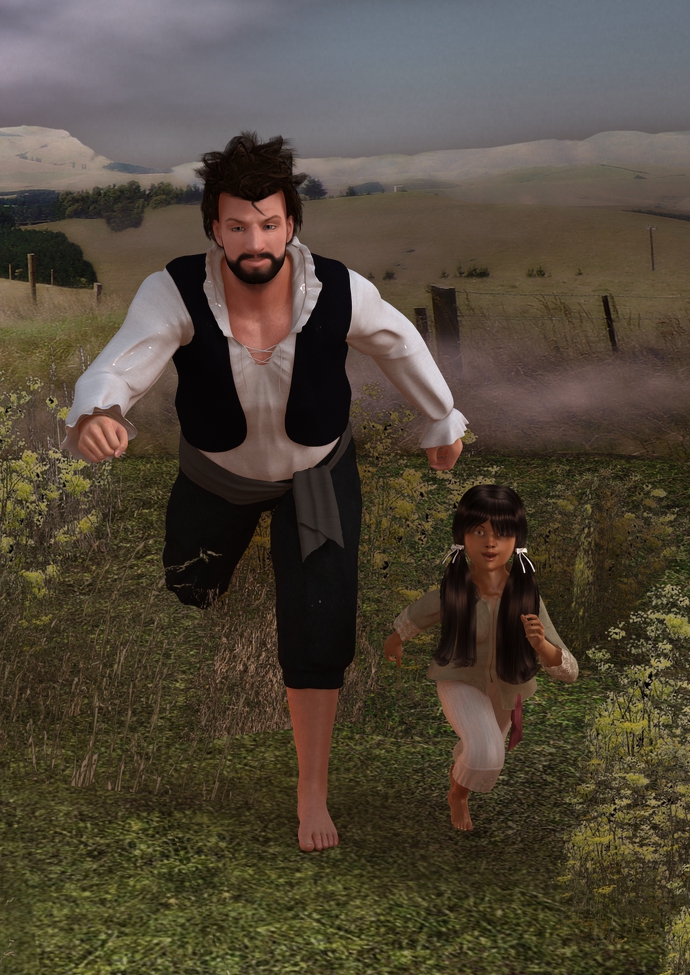 The Fox Cycle- Story Three- The Elders of Ville-Marie

Words and hands were rung throughout the Hall of Elders of Ville-Marie, but still none had an answer.

The question was simple enough- What do we do about de Villefort and his gang?

But the answer was something that eluded these “most wise” men of the city.

Mother of god, what could they do?

Then all the nervous voices fell silent as the great elder -Jacques LeGrande- was led into the chambers.

His gnarled walking stick waved their attempts at pleasantries away, and he swept them with his cyclopean eye.

He had been told of their problem, and he had come with an answer.

After he felt he had waited enough to gain sufficient respect, he told them what it was.

When the three chosen men came to the farm of Gerard la Russo, they were greeted (to their silent relief) not by the unpredictable, wild-haired owner, but by the girl he referred to as his niece. An ebony-haired child of but four, her dark eyes looked at them warily as she stood on the front stoop of the house, a vinegar soaked rag in one hand and the bowl she’d been using it to clean with in the other.

“Where is your Uncle?” Asked the leader of the chosen men.

Instead of speaking, the child merely pointed at the nearby field- tall with late-summer corn.

They thanked her respectfully and left, repeating the various whispered gossips of the native girl’s origins and how she came to be with La Russo. Some said she was his slave, others said his secret daughter, while still others said she was an orphan whose parents he had killed in a duel. Whatever the truth, they pitied the child.

The uncle they found wrestling with a tree he was attempting to uproot- covered in dirt and sweat, his leathery skin almost as tanned as the girl’s and his chestnut hair and whiskers extending in all directions. Word was that before he came to New France, this man had been a Captain of the Musketeers, but now he was seen as a poor excuse for a farmer at best, and a notoriously temper-mental drunk at worst. A savage made more so by the land and his demons.

Just the man they needed.

La Russo, for his part, did his best to pat down his hair and wiped his hand on his pants before offering it.

“How may I help you today, respected elders?” He asked them, looking somewhat bewildered.

“Farmer Gerard,” said the eldest. “Are you not aware that every man in this community must do his service to the state?”

La Russo replied he was.

“And, have you done so since you took up residence here in our beautiful land?”

La Russo hesitated, and then admitted that he had meant to but hadn’t gotten around to offering.

“There is a fine for not doing so.” Said the leader, sternly.

“A large fine.” Added the second.

Gerard took on the look of a drowning man.

So they threw him a rope.

“But we will waive it, brother,” said the leader in a not unkindly way. “If you are able to do us one small service…”

As the three old men walked down the road which led back into Ville-Marie, they moved like men who had just escaped a trap and were now enjoying the vigor which comes with knowing that their lives were again their own.

And in a very real sense they were.

The problem which had vexed the elders had been a simple one- there was a young gentleman named Richmond de Villefort who was the son of one of New France’s wealthiest merchants, but who was also a noted bully and scoundrel. He had come to Ville-Marie not a year before, and was causing no end of trouble with his licentious ways, having even assembled a group of toughs around him. They could arrest him, but doing so would incur the wrath of his father, whose ships brought in much of the supplies the city needed and would undoubtedly lead to a disaster. To make matters worse, the son had harassed some members of the household of the Intendant, and so the head of New France himself had written to the Governor of Ville-Marie and demanded something be done about the boy.

It was this that they had been deliberating the night before when the honorable LeGrande had come to them with an answer.

They would make the temperamental drunk La Russo a temporary agent of the government, and send him off with orders to remove the de Villefort boy from the city. Given the tempers of the two men, they would undoubtedly come to blows, and one or the other would be injured or (hopefully) killed. If it was de Villefort who took the worst of it, they would ship either him or his body back to France and blame the overzealous La Russo for the crime. The father would likely demand La Russo in exchange for peace, who they would happily give him, and be rid of a troublesome drunk.

If it was La Russo who died who was injured (a capital crime), they would arrest de Villefort for harming an officer of the state and ship the son off to the Intendant to deal with. Thus also sparing themselves the blame and again ridding themselves of two nuisances with a single blow.

Now all that was required was to return home, and wait.

Early the next morning, the Elders of Ville-Marie gathered at the central hall, each of them eager to know the results.

Word had already spread of a confrontation the night before between La Russo and de Villefort.

Some said Gerard had gone to arrest the boy at a local bar and been killed.

Nonsense, said others, it was de Villefort and members of his gang who had died.

Finally, the chief elder appeared and they demanded the truth of the matter.

Had there been a confrontation?

There had, admitted the chief elder.

Had weapons been drawn? Blows exchanged?

Most definitely. It was a terrible battle.

So then, who had won?

At this, the chief elder raised his hands to the sky, and cried.

On the farmstead of Gerard la Russo, little Rennie stood on a stump and stirred the breakfast pot while behind her the group of young men at her uncle’s table laughed and exchanged drinks.

“To our new teacher!” Toasted Richmond de Villefort with a broad smile and a black eye.

Returning the toast, Gerard la Russo nodded in approval. He had been thinking of taking on students for some time- it had been getting lonely on the farm with no-one but young Rennie to practice combat with. When the elders had asked him to remove the young toughs from the city, he had taken it as a chance to show off his skills and perhaps advertise. However, once he realized that all of these young men were from good (and wealthy) families, and not of a bad sort at heart, he’d decided to make them his own.

One staged fight later to prove his mettle, and they had been the ones to come to him.

The elders had asked him to remove the youths from the city, and he had.

He would be sure and drop by the hall later to thank the old men for their kindness.