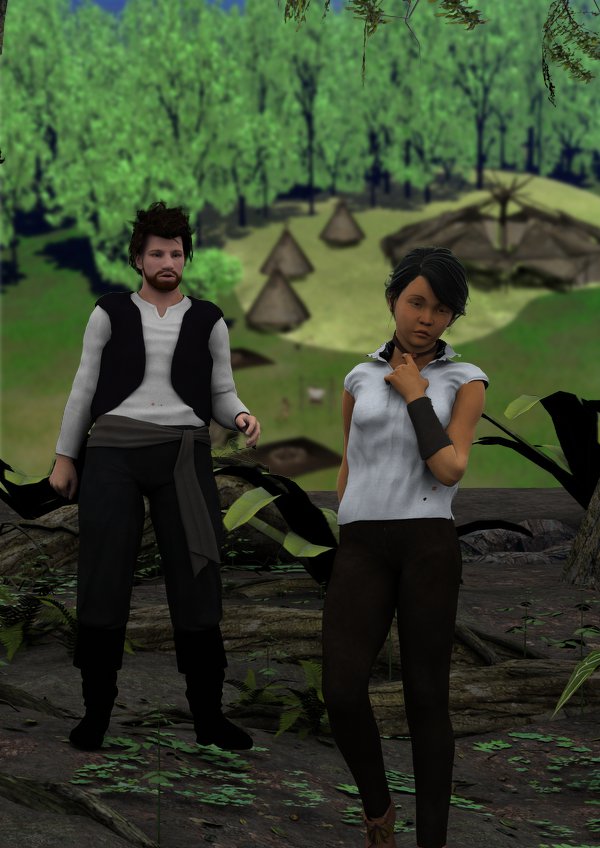 Gerard la Russo and his adopted daughter stood on the crest of the hill looking down on the little native village.

It was such a small place for so a long journey, he reflected. It was a late-summer afternoon, and only a few people were visible in the clearing, with most having found shelter from the heat inside the tents or elsewhere. Still, it was the place they had sought, and it marked the end of their quest.

After a short time of standing there, Gerard gave a mental sigh and decided there was no helping it.

“Well Rennie,” he said with a gentle touch on her shoulder. “Let’s go meet your family.”

Beside him, the thirteen year old girl hesitated, and then he saw her face scrunch up in that expression she made when she was making a decision.

“Non,” she finally said, and turned to start walking back the way they’d come.

Gerard stared at her, dumbfounded. “What? Where are you going? These are your people. The ones you have wanted to know for so long.”

But Rennie, stopping to make a long glance back in the village’s direction, shook her head.

“Father, when I came to you and told you I wanted to know who I really was, you told me that we would find out together.  Knowing nothing but the name of my native father and his tribe, you talked to the native labourers on the seigneuries and learned that my family was from the Owl Clan of the Fox Tribe, and that they lived beneath the great inland lakes to the west.

“For many, that would have been enough, but instead of giving up, you prepared yourself and I for the journey to find the tribe. We had to learn how to survive on the land, and speak with the natives, and it was hard, but you did it- for me. Even though you knew that we would lose each other at the end.

“Once we had found Coureur des Bois who would guide us, you went into debt to Uncle Armand to pay them and you traded away most of the livestock to buy supplies. I should have stopped you then, but in my heart I still wanted nothing more than to see my people, and know where it was I belonged.

“The journey here was a hard one, and we fought for our lives for and against the natives and their strange family relations. If it were not for Ahanu and his Mississauga people, and his deep friendship with you, we would have undoubtedly perished. It was he who helped me rescue you from the Seneca when they captured you to ransom you to the English. It was he who treated me like a daughter, and taught me what it was to be one of The People.  I thank him for that.

“With our own guides gone, he gave us his own sons Mundoo and Askook to help us on our journey, and with their help we have made our way through the hostile lands of the Fox Tribe and found the Owl Clan. They too have risked much, and I can never repay them. “

She looked up at him, her eyes almost filled with tears.

“Father, I wanted to know where I came from. I wanted to know where I belonged, and why I was never treated as an equal by the people of Ville-Marie. I have grown up with the love of you, and my friends and my uncles, but I have always felt a part of me was missing. When that cursed farmer tried to turn me into a slave two years ago, I was scared that without you to take care of me, someone else would do the same thing. I wondered where I belonged, and I prayed to Mary each night to let me know my way.”

Gerard looked at the young girl he’d raised, now suddenly so much like a woman.

“Mon dieu, Rennie. She has!” He declared. “The people below are your family. Do you not want to know them?”

Now both of them were crying, and embraced in a hug.