“It is the duty of all young women to marry and produce children for the good of New France!”

These words, spoken with authority by the Father Tremblay, echoed in the ears of Gerard la Russo as he marched along home after his audience with his parish priest.  And they were the truth-were they not? Although he had raised his adopted daughter Renard more like a boy, and the thought of parting with the child tore at his soul, he had to face the truth- Rennie was a girl, and at 15, one of marriageable age!

Past marriageable age- the priest had pointed out the average age for a girl to marry in New France was twelve! Twelve!

He had been lax in his duties as a father.

Did Rennie not deserve happiness? Did she not deserve a man to love her, and a bundle of joy hiding beneath her skirts?

That last thought brought a smile to Gerard’s face- not the idea of Rennie with kids, but that of her wearing a skirt! The child had never taken especially well to the womanly ways.

But again, perhaps that was her upbringing. Growing up first with the old Musketeer, and then after he’d opened Ville-Marie’s first L’école D’armes with Richmond de Villefort and his other comrades, she had always been in the company of rough, fighting men.  When had she had the chance to spend time with other women?

Well, there was Seigneur Dupris’s daughter- the two were thick as thieves.

But, had not the Seigneur come to his home more than once to complain that Rennie was a corrupting influence? It did seem as though Rennie had been a force upon Claudette much more than young Claudette had been upon Rennie.

He had never considered that a bad thing, however, as young Claudette had been well on her way to being a spoiled little princess before she’d met Rennie. After they’d become close, Rennie had brought the girl down to earth, and given her a sense of perspective- something that her powder-faced father had never managed.

So the girl did have her good qualities- he mused.

Perhaps, she could have a similar effect on one of the young men her own age?

He and his partners taught a number of them- many of the local families sent their sons to him to learn the fighting ways. Perhaps young Peter? Or Wenceslas? Both were farmer’s sons of good character, and their fathers were strong men who Gerard respected- not boot-licking peasants who spent most of their days polishing their Seigneur’s brass.

Or was he thinking too low?

Should his daughter not have the best match possible? Was he himself not of noble, if somewhat diluted, blood?

So, perhaps Jean-François then? He was the son of Seigneur Lapointe, and while yes he did have the reflexes of a dying cat (and the physicality of one), he wasn’t all that bad of character. He was well read, and generally seemed of good humour. His father was among the wealthier Seigneurs in Ville-Marie, or as they had started to call it recently- Montreal.

Perhaps he could make Rennie the boy’s tutor, and in the time the two spent together affection would blossom? She was such a stubborn girl that forcing the issue wasn’t likely to go well, so this seemed the wisest of choices.

Yes! He decided as he came up the path to the front gate of his farm, he would do it!

So with determination, and a little excitement, he marched around the house and into the training area, where in the late morning sun he could hear the clanging of blades and the hearty shouts of spectators.

For what he saw was a training ground littered with the fallen, moaning bodies of half a dozen young men, and in the middle, her bronzed muscled skin slick with sweat and her eyes glowing with fire, stood the young woman who had put them there. 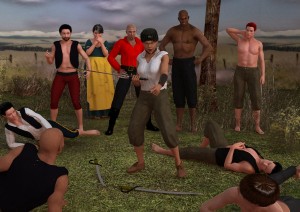 “Come on! You call that a fight?!?” She yelled at them. “Mon Dieu! If your ancestors could see you now, they’d be pissing themselves that their loins had produced such a bunch of children! Can not one of you defeat even a little girl? Should I send someone to the nunnery to find someone you can beat in a fight? Get up!”

Then, noticing her father had returned, Rennie thrust her practice sword into the hands of one of the assistants and rushed over to him, her harsh demeanor completely changing.

“Papa!” She said, greeting him with a toothy smile. “How was your meeting with the Father? What did he say?”

And Gerard, looking between the practice ground and the girl in front of him, shook his head.

“He worried that I hadn’t come to confession recently. Nothing more.”

Perhaps, he decided, God would be a better matchmaker than he.