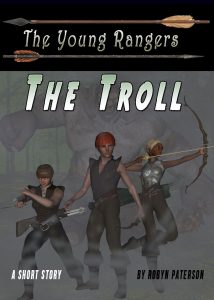 The troll came over the rise.
Dark green muscled skin. Eyes like coals. Taller than decades old trees. The thing lumbered along the forest path in huge gaping strides that Thorin could feel through his knees. It was like someone was dropping rocks onto the ground in front of him- huge, heavy rocks.
From his vantage point in the bushes, Thorin watched, and tried to focus his breathing. He wouldn’t be able to make the shot if he didn’t breathe properly. Tremors ran along the bow in his hand, betraying his inner feelings, and he forced himself to ignore it, trying to stay on target.
He had chosen this. It was his choice to be here.
Now the others were counting on him to make the shot.
Arrows would penetrate a troll’s thick hide, but they wouldn’t hurt it. He’d been told that it was like putting arrows into a tree- a little penetration, but no real damage. No, in order to hurt this monster he needed to aim for its weakest points- the eyes, the joints, or the throat. Any of these would at least hurt it, and Thorin and his comrades could work from there.
Myra was the best shot among the young rangers- she would aim for the eyes. Thorin, as the next best shot in the trio would aim for the throat. Feena, the least skilled with the bow of the three ranger cadets would aim for the legs in hopes of slowing it down.
And all of this would only work if they acted as one single, timed unit.
As the troll approached the chosen point, Thorin began to pull back on the bow.
His eyes no longer focused on the flower that marked the place where the troll would fall, but on the beast’s throat, which was encircled by a necklace made of tiny bones and animal skulls. It was almost like a target, and Thorin aimed for the center…Waiting…Waiting….
NOW!
Timing his shot with his breath, Thorin unleashed the arrow.
At the same time, from their chosen hiding places, Thorin heard the twanging sounds of other arrows being loosed.
The troll seemed to sense something was wrong, and actually stopped and gripped it’s necklace in its hand, but it was too late- the arrows were already on their way, and its fate was sealed. Nothing could save the troll from the deadly shafts but a miracle.
And then, one happened.
As Thorin watched, the arrows they’d unleashed were suddenly flung aside by a mighty gust of wind that sent them clattering off into the trees! It was like an invisible hand had reached out and swatted them from the air.
Mouth agape, Thorin stared.
How was this possible? Could this be real?
He froze, he wasn’t sure what to do.
From their hiding places, he saw the other two ranger cadets emerge. On the other side of the path, Myra was standing now, her blonde hair shining in the sun as the slender elf girl began to unleash a torrent of arrows at the beast with amazing speed. Feena was behind the troll, and she too rose from cover, firing as quickly as she could. Her stocky muscled form tiny compared with the troll, but she stood near it undaunted- like a child facing down an adult.
However, no matter how many arrows they threw at it, the same thing happened- each of them was knocked aside while the troll just stood there and watched them, a growing snarl on its lips. Then the snarl turned into a howl of anger and it let out a mighty roar, raising its club-axe into the sky.
Then it charged right at them.

When Thorin had been roused early that morning by his adopted sister, Myra, the last thing he expected was to be in the middle of a war by the afternoon.
But that is what had happened.
Even before the oatcakes were finished, a messenger had come to the house and let them know that Thorin and Myra were to report not to their school, but to the archery grounds on the edge of the city as soon as they could- kitted for travel and battle.
Thorin and his sister had looked at each other in wonder, but they’d done as they were told. They were cadet rangers in the Black Woods Clan, and it wasn’t unusual for them to be summoned to surprise training exercises. But this felt different, although Thorin wasn’t quite able to say why.
When the two had arrived at the archery grounds, they’d found over thirty of the village’s best warriors there, along with men and women hurriedly preparing horses and other equipment. In the chaos, they’d found their teacher easily enough- Ranger Hastur’s bright red bandanna was easy to spot in this sea of green and brown. The third member of their cell, Feena, was already there with him.
“Alright kids,” he said to them, taking them aside. “You always complain we won’t let you actually see real action. Well, today’s your lucky day. I’ve convinced Captain Redleaf to let the three of you come on today’s mission.” Then, when he saw their faces he added…”But! Only as runners and observers. You’re not going to see real fighting if I can help it, especially not today!”
“Yes!” Feena grinned wolfishly. “This is going to be great!”
But Thorin wasn’t so sure. “Sir, why do you say “especially not today?” What kind of mission is this?”
Hastur tugged at his beard, “Well now. Today’s a bit of a special one. I can’t say I’ve ever seen the like of it. Scouts have spotted a bunch of trolls marching on Havensford- maybe twenty of them I’ve been told.”
Trolls.
Thorin felt his legs begin to shake at the mere mention of them. Trolls were huge, nasty creatures who lived in the uninhabited Southern Reaches and were part of the reason why few men did. It was said a single troll was equal to a dozen armed men in battle, and just the whisper of their creed was enough to set most people’s hearts racing.
“Really?” Feena gasped. “That’s amazing! Can you believe it, we’re going to see real trolls!”
Hastur shook his head. “Not if I can help it, cadet. You three will be staying with us in the command group.”
“But,” the energetic girl continued. “We’ll see dead ones, right?”
Again, Hastur shook his head. “Our mission is to convince them that this isn’t the right course of action- by force if necessary. Let’s hope we won’t have to be killing any of them at all.”
“Sir,” Myra said, speaking for the first time since they’d arrived. “Are trolls not solitary creatures?”
“Aye,” Hastur agreed. “Which is why I said it’s a strange day. I’ve never heard the likes of of a Troll war-party. Goblins, yeah, and sometimes they get a stupid troll to help them, but Trolls don’t do this kind of thing on their own.”
“So why are they here?” Thorin asked.
Hastur laughed. “If I knew that, boy. I’d send them back to their mothers for a spanking. Now, get some horses from the stable and be ready to ride when the horn sounds. And stay close to me, understand?”

“You want us to do what?”
Hastur looked at them with deep sincerity. “I would not ask, cadet, if I didn’t think you and the others were ready.”
Thorin shook his head. “But we…” He started, and not finding the words, he looked at his teammates. Feena just shrugged, but Myra addressed their mentor.
“Sir, you did say we wouldn’t be seeing combat.”
Hastur smiled. “You were the ones who wanted action, now you have it.” Then he paused and addressed them in a more serious tone. “Look, I’m not asking you to fight this troll. We don’t know why, but it’s left the pack and is heading for that farmstead to the Northeast. Your job is to get to that farm ahead of it and warn those people, that’s all. There is no battle involved here. Only warning the farmers and returning.”
The trio looked at each other, then nodded to their leader in unison.
“Yes, Ranger!”
At that, Hastur pointed toward their mounts. “Ride them to the edge of the forest, then leave them. They’ll return on their own.”
“I just hope we return too,” Thorin mumbled to himself.