At first when I started to read it, I found it a little tedious because there was so much setup and it was about an era of political chaos so there were a lot of players in the politics of the era. Then once the Empire began to shatter, it turned into what I thought was going to be an endless series of fights, and again I though, do I really want to read 100 more Chapters of this? (The novel is 120 chapters long, roughly 900 or so pages.) But, I persevered because it was interesting, and because each chapter ends on a cliffhanger of some kind which really helps to keep you reading.

Needless to say, I became hooked, eventually the number of political players begins to drop like a rock and there are so many cool warriors and characters to root for on every side. In this setting, battles were often decided by a single general whose prowess against an enemy general in a pre-battle duel could even shatter the enemy’s whole will to fight. Characters switch sides, intrigues are planned, plots foiled, and the story just gets more and more amazing until…

Well, that would be my only complaint.

Because 3 Kingdoms is (as the translator puts it 7/10ths History and 3/10ths fiction) it runs into the problem that what really happened historically isn’t as interesting as what could have happened dramatically. The author is somewhat trapped by history to give the story the ending the real events had, and as such the story ends with something of a whimper, not a bang. The big events occur at the start of the last 3rd of the novel, and everything else is just housekeeping. (Somewhat akin to “scouring the shire” in Lord of the Rings.) That said, it’s still interesting, and the ending is not unsatisfying, just a good example of how history and drama don’t always quite work well together. Drama gives way to History, and story goes on.

But, what a history! This was an exciting era where a single man could go from plowman to Emperor in a matter of years! Armies consisted of tens and hundreds of thousands of men, and…and…I could go on for pages about how cool this story is, but the best choice would be to read it yourselves if you haven’t had the pleasure. You can find an online version at http://www.threekingdoms.com but the best way to read it is to find a good old paper copy of the Moss Roberts translations (there are 2 volumes to it, make sure you get both) entitled “Three Kingdoms: A Historical Novel”, which is without a doubt the best translation out there. Not all translations are equal, and Roberts does a beautiful job of turning ancient Chinese into modern English. I learned a lot about Chinese history, thought, and culture from reading this book, and I think my only regret is that I waited so long before reading it. 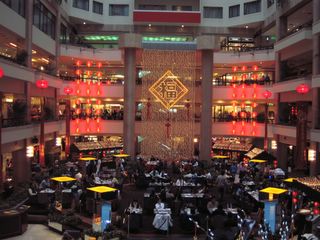 I started my Sunday tour of Taiwan at the grand Howard Hotel, and this is the Atrium of said hotel where they served an incredibly good brunch. Well, the deserts were incredibly good, the hot stuff was laced with MSG and unfortunately not to Rob’s tastes. ^_- 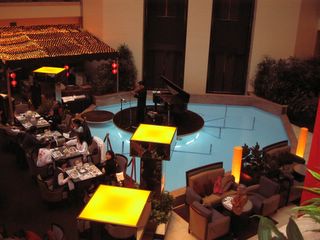 They have a platform with a piano in the middle of the Howard Atrium where the guests can be serenaded while dining. Today we had a man with a violin playing along with CD recordngs, which created an odd half-orchestral effect. I told Connie it was like listening to someone do Violin Karaoke. 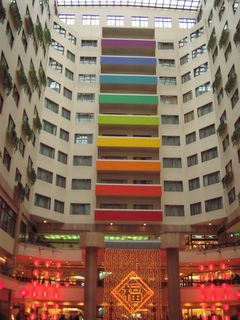 A view from the Atrium floor of the Howard Hotel 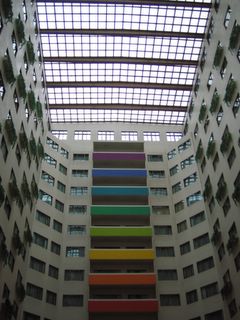 Another view of the Howard Hotel from the inside. 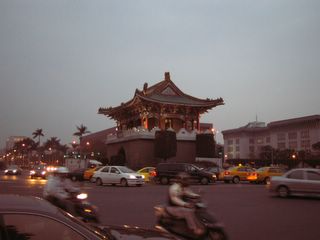 The Qing-Dynasty Era main gate to what is now the Presidential Palace, now the center of a huge traffic circle. 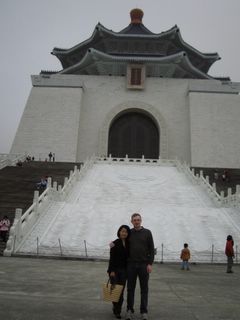 Robyn and Connie Standing in front of the Chiang Kai Shek Memorial Hall. Chiang (whose name I keep spelling wrong) was the general who controlled half of China at one point and then fled to Taiwan when his army was defeated. He set up shop here in Taiwan as a local dictator and turned it into a fortress to hide here from the Maoists. 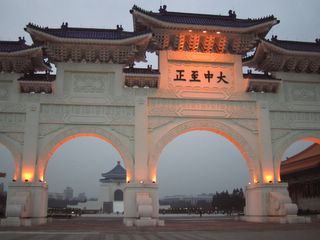 The Imposing Main Gate of the Chiang Kai Shek Memorial. 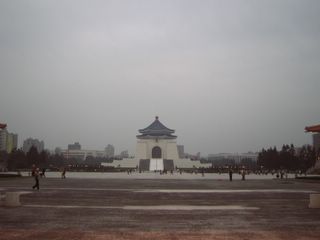 A view of the memorial grounds from standing underneath the main gate..this place is HUGE. To the left and right if you look very closely you can see the edges of the concert hall and opera hall roofs. 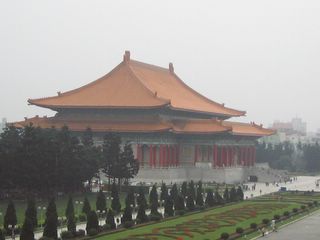