So, this morning Connie and I both got up early and went to see the new Harry Potter movie, along with seemingly everybody else in Taipei. But, by virtue of living within a 5 minute walk of the theatre we were able to get a good spot in line, and only had to wait a half hour to buy tickets for a showing 3 hours after the time we stood in line to buy tickets! Like I said, everyone in this town wants to see this movie, and I think it will be the topic of my classes for the week. (Which is why it’s important I see it, doing research for work after all! 😉 )

Regardless, I have to say that this, the fourth Harry Potter film, is by far 70% of the strongest and best Harry Potter movie to date. I say 70% because like the film Seven Swords I saw earlier this year, it feels like you’re watching the 2 hour 40 minute version of a movie that’s at least 4 hours long. The result of this is that all the major scenes are there (I would assume, I haven’t read the books) but almost all the character material seems to have ended up being chopped out of the film. The characters in the movie are completely undeveloped and pretty much just there to push the plot along. Characters come and go, and to give something away, when one of the movie’s “major” characters dies, you feel….absolutely nothing because he’s not even a name! He’s only been in a few scenes, and mostly background in them. The same with all the cool “rivals” from other schools, they get a big introduction and then ignored for the rest of the story!

I know that each Harry Potter book has been bigger than the last, and I think they’ve truely reached the point where they can’t fit a single book into a single movie. Either something has got to give, or they’d be better off turn it into 2 two or more hour long movies released a few months appart instead of trying to cram it all into a single film. I mean, this isn’t the greatest character drama ever put on film, but it deserves better than what this film gave it.

Also, I kept running into the “Poor Harry Potter Syndrome” which seems to pop up in each of these films, which is that whenever Harry is in trouble nobody lifts a finger to help him. The school is a deathtrap, and events occur which nothing prevents the adults from interfering in, but they don’t, because that would prevent Harry from nearly being killed…again…and again…and again…. I don’t care if my children are wizards, there’s no way in hell they’d set foot at Hogwarts considering the degree of care that the teachers show for students at that place! And with friends like Harry has, who needs enemies?

Oh, and everything but the character stuff is amazing, especially the cinematography, it borders on asounding at some points. 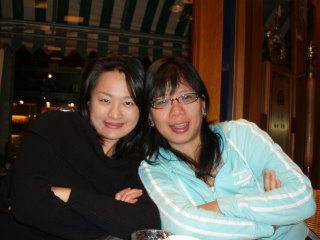 After the movie, Connie and I went to the Tien-Mu district to meet up with her friend Debby at one of our favorite restaurants Little Black. Debby is a tour leader who travels in a year more than most people do in a lifetime, and is married to a very cool Swiss police officer. (Who she doesn’t get to see nearly enough.) I asked her what her secret was to overcoming Jet Lag, and she told me she just doesn’t get it! Lucky girl! 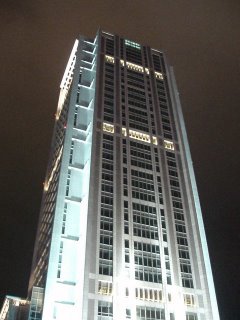 While I was waiting to meet my friend Terrance for dinner the other night near Taipei 101, I decided to do a little night photography to test out the camera’s abilties. I tried many different modes, shutter speeds, and approaches to night photography, most of them not working as well as I’d hoped. But, I’ll post some of the more interesting results here, like this tower of power! 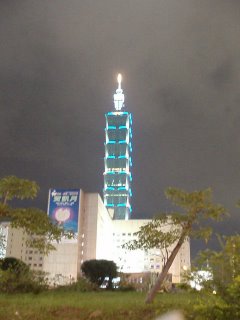 The world’s current tallest building, sitting in the heart of Taipei, at night. It’s quite a site to behold, and I only wish I had a tripod so I could get rid of the blur factor caused by natural human movement. Well, something for the future! 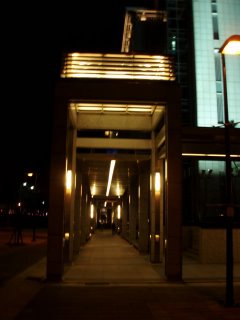 Around the white building two pictures back is a concrete walkway, so I decided to test out the camera’s abilties on night shots. This was one of the better results. 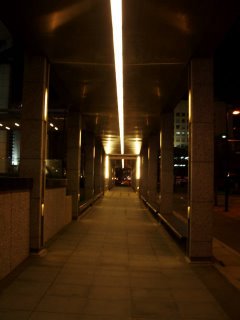 Another shot of the walkway around the tall white building a few pictures back. 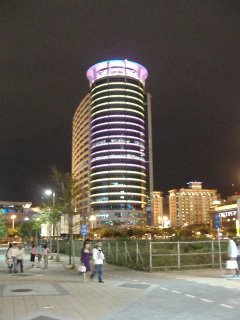 Here is a very colourful building near Taipei 101, in fact all of those bands of light you see change colours and do it in waves, fade-in/outs, and rippling. Actually, one very cool thing you will see here on some of the larger office buildings at night is a system which actually controls the lights in the various offices and turns them on and off in patterns. Literally turning the whole building into a giant piece of art, or advertising. I’ll get a picture of it sometime. 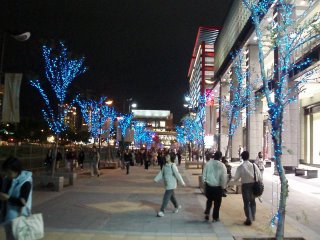 Here’s a shot of shoppers walking out amongst glowy trees covered in blue lights! This concourse is about 3 city blocks long, and ends around the Taipei 101 building. 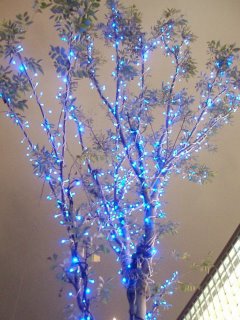 A close-up shot of some of the glowy trees. This isn’t for Christmas, they’re always like this. 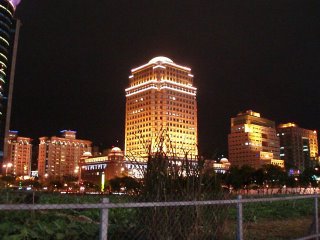 Taipei City Hall trying a very fast shudder speed to compensate for the natural moment of the human hand. It worked better than I expected, but there’s still some blurriness to it.