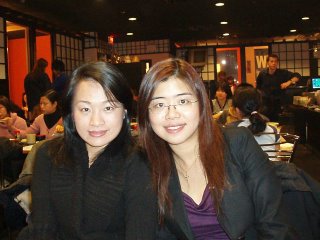 Connie and Anthea. In the background you can see the All-You-Can-Eat Japanese restaurant Anthea took us to called Syogun, which I assume is an odd transliteration of the word usually written “Shogun”. As usual for Canada, it was completely run and staffed by Chinese, as there are very few Japanese restaurants run by actual Japanese people -my favorite Sushi Chef in Vancouver was Vietnamese, in fact. There aren’t very many Japanese living abroad, for some reason they seems to like Japan a lot and don’t leave very often. I only know of one Japanese restaurant run and owned by real Japanese offhand. Still, the food was pretty good, and we had a great time. Thanks Anthea!