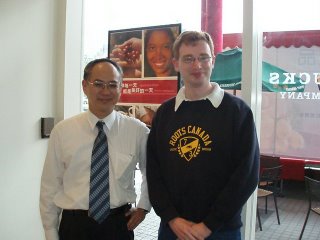 About 2 weeks ago I had my last class with Job (pronounced “Jobe”, as in the character from the Bible), the manager of the brand-new NeiHu Branch store of Far Eastern Geant, a Taiwanese hypermart (supermarket+department store) chain. I’d taught Job for about 4 months, each Friday afternoon from 2-3:30. He was an interesting and somewhat difficult student to teach for 2 reasons: 1) he had great English reading and writing skills after years of reading practice, but almost no speaking or listening skills, and 2) he was less than enthusiastic about our class. (He holds the record of being my only student who when told “this is our last class” lit up like a Christmas tree and said with a big smile “I KNOW!”) His bosses had decided that he needed to improve his English (ironic, since Geant is a FRENCH chain and his bosses speak French) and so forced him to give up his Friday afternoons to practice.

Oh, we got along well enough, a little haltingly at first, but it did smooth out over time. He was hard to pick materials for, since everything was either too hard or too easy for him, but eventually we got him balanced out to using more standard materials. Once we could communicate at a decent level, he told me all about his store, his company and his industry here in Taiwan. I actually learned quite a bit from him. He’s actually a specialist of sorts, his company decides where in Taiwan (or China, next) they want to open a store and sends him there. He literally builds up the whole store for the company from nothing using the company resources, runs it for 3-4 years to get it on it’s feet, then hands it over to the next manager and goes off to do the whole process again. He loves it though, considering it a challenge and tries to make each store better than the last. I have to say he’s a bit of an organizational genius, and it was amazing how much he knew about everything in that store, it really was his baby.

I might not miss teaching him, but I do think I learned quite a bit from him.

Good luck in the future, Job!