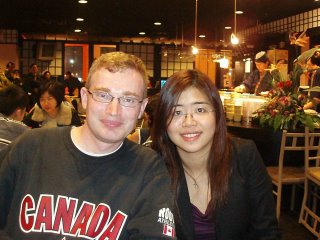 Saving the best for last, Connie and I spent our last full day in Canada in Toronto shopping and visiting with my best friends Chad, and then Anthea (pictured here with yours truely). It was a hectic and busy day of running around, but a lot of fun and I bought far too many books as I prepared to return to Taiwan. Chad, who is too camera-shy to appear here, is a storyboard artist in Toronto’s animation industry, and has probably helped to make most of the cartoons that have come out of that city in the last 10 years or so. He’s one of my oldest and best friends, and one of the funniest and most cynical people I know. I would say I miss him a lot, but the truth is we’ve lived in different cities for a long time, so we’re used to being apart and only seeing each other once or twice a year. If he can just get over his MSN phobia, we’ll be talking a lot more in the future too!

I met the lovely Anthea during my first year at the University of Western Ontario, and we’ve been the best of friends ever since. We sat down across from each other in the school cafeteria and started to talk, and in a way that conversation has never ended despite the passing of the past 5 years. No matter how much time passes, we always talk like we just met each other the day before. She’s a businesslady in Toronto now, and doing quite well for herself. I have little doubts she’ll be running a company someday.