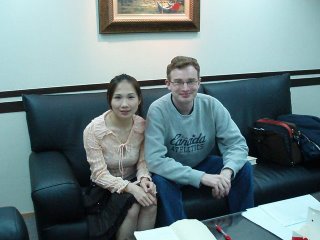 On Thursdays I teach two company executives, Kelvin and Cindy, spending an hour and a half with each of them to improve their English. We have a good time, and Cindy and I have come to be pretty close, more like friends than teacher and student. Today when I showed up she looked at me with sad eyes and said “today I have to say goodbye to you”. This was quite a shock considering that there is still 5 more weeks to their contract and last week they both decided to sign on for another 3 months!

Apparently within the last week a higher position in the city of Kaoshiung (the major city at the South end of Taiwan) suddenly became open, and Cindy was given a chance to take a big jump up the corporate latter if she was willing to relocate within the week. It was a pretty big offer for someone who had only been in the company 7 years, but it showed their faith in her abilities (which are pretty strong) and it probably wasn’t going to come again- so she took it. She has to leave her month-old renovated dream-home behind, and her son (who needs to finish school), but there was no-one (including me) who didn’t think it was the right move.

I was actually pretty sad when I heard this news, I didn’t know how much our chats had come to mean to me until today. She’s a very warm and caring person (a former nurse), and has a genuine likeable quality to her that makes people trust and like her. She’s a good person to know, and I will miss her a lot. One of the hazzards of my job is getting to know interesting and cool people and having to say goodbye to them just when they become like family. I’m used to it by now, but now and then someone comes along who reminds me that there is a loss every time I say goodbye to my students.

I wish her well, and hope to see her again someday when I visit Kaoshuing!