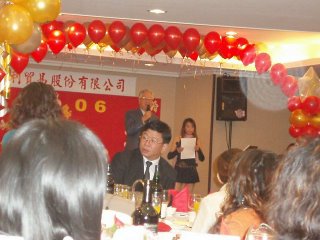 It’s tradition in Taiwan for companies to have a year-end party to celebrate the past year and to look forward to the next one. (Very similar to our own Christmas Office Parties in Canada, and with no less drinking.) This year I was invited to the one for Rotary Taiwan, a medical equipment company I have been teaching at on Saturday mornings. Having never been to one of these parties, I was more than enthusiastic to go, although the knowledge that I’d be the only one speaking English there (my students at the company are very low level) was a tiny bit inimidating. So, last Saturday night with Connie in tow we were picked up by the Assistant Manager and taken to the downtown Holiday Inn for the party.

The gentleman you see in the picture there is the Company President, he’s giving his big thank you speech to the employees for their work this year. Behind him you can see the hostess for the event, a 40-something year old woman dressed as an 80’s Japanese teenage pop-singer (and she did indeed sing!) who the company hired to MC the event.

It was a lively and fun party, and everyone there was in good spirits, so I guess the company did well this year. As it turned out, I wasn’t the only foreigner there, there was also a representative from Cannon Japan there (their business partner) who gave a speech in what I’m told was almost unintelligable Japanese accented Mandarin to the enthusiastic crowd. Also the Vice President’s son (also an executive at the company) had obviously studied overseas from the perfectly accented English he spoke as we chatted a bit. I wasn’t sure what to expect from this party, but I was sure happy with what I got!