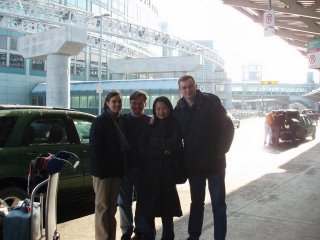 A final very quick shot of myself with Ellyssa, Kirk and Connie before I handed them my winter coat and headed into the airport to return to Taiwan. It was a great trip home, and it reminded me how lucky I am to have such good friends and family in Canada, I do miss all of them, but I will return to stay someday.

Actually the return flight was one two short flights (Toronto-Newark, Hong Kong-Taipei) and one very very long flight (Newwark-Hong Kong), and actually felt much shorter than when we returned to Canada two weeks ago. I just watched CSI on the TV, read and slept, and then suddenly we were there! This flight also taught me the folly of bringing young children under 2 on a 16 hour planeflight, as the second half of the trip turned into all those kids crying and screaming because they were so uncomfortable. (Thus making the rest of us who were trying to sleep REALLY uncomfortable. 🙁 ) I think I won’t take such young children on a plane in my life, at least not if I value my sanity.

The other problem that happened on the trip home was that a tin of the Tim Hortons French Vanilla Coffee mix we bought developed a leak when the bag was thrown into the airplane. So…When I opened the bag I discovered all of my books I bought were covered in French Vanilla coffee powder. 🙁 It is really astounding how the powder managed to get into everything, even the books sealed in plastic are covered if they had a tiny hole. I had to clean everything off, and it’s still a little sticky and smells like French Vanilla!

Since I have returned to Taiwan I have been spenting my time waking up at 3am and sleeping at 8pm because of the jetlag. In some ways I’d say the jetlag this time is worse than it was going to Canada, probably because my body had only just adjusted to Canadian time and now here I am back in Taipei! On the plus side, it was -6 in Canada, and it’s 23 degrees here in Taipei! ^__^ It’s like walking from Winter to Summer in a single weekend!

Overall, though, it feels good to be back. Taipei really has become my second home, and while I love Canada, I love my friends and students here too. They have helped to make this place a good part of my life, and I look forward to seeing them again and getting back to work.