In Defense of the Male Miniskirt- Thoughts on the First Season of Star Trek:TNG

With the release of the first season of ST:TNG on Blu-Ray DVD in remastered sets this week, I thought I’d comment on what I think of as an overly maligned season of the show. 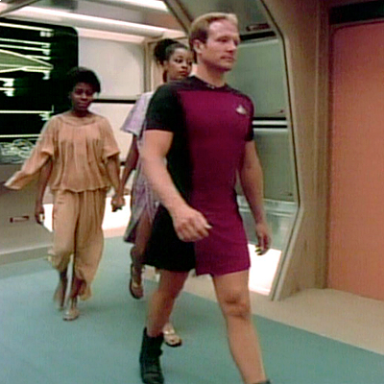 There are many things that people tend to remember about the first season of Star Trek: The Next Generation. They remember Tasha Yar, Wesley almost getting killed for stepping on the grass, uneven writing, Wesley saving the ship, wooden acting, universal hatred for Wesley, that damned clip-show episode, and of course the dreaded male miniskirts (and their female counterpart- the cheerleader outfits).

For many, it is a season they look down on, skip when trying to hook people on Star Trek: TNG, and generally say “it gets better later, I swear” to new viewers who are determined to start at the beginning. There’s no Borg, the Ferengi are like a completely different race, the Romulans make only a brief appearance, and Riker has no beard.

So what is there to like about Season One?

This is pretty much how I felt about it over the years, and it stayed that way until a couple years back when I went back and re-watched the first couple episodes in what could be called a curious case of nostalgia. (Someone had stuck them up on Youtube for a time, and I was curious, and feeling nostalgic.) I expected to find many things, but what I didn’t expect to find was a different show than I remembered.

The show I remembered as Star Trek:TNG was pretty much the show from Season-Three to Season Five, which for many people is the show they think of fondly when they think of ST:TNG. Season Three was jam-packed with winning episodes and was when the show basically turned from syndicated curiosity to “must watch TV” for a lot of people. That’s the point where it started to seriously become part of popular culture at the time, and Patrick Stewart was suddenly being considered TV’s Sexiest Man Alive.

It’s a great show, and it was this period that became the template for not only what would come after, but also Deep Space Nine, Voyager, and even Enterprise. For people of my generation, this period of ST:TNG was the high water mark by which most Science Fiction TV would be judged, and is only equaled by the mid seasons of Deep Space Nine in quality.

But, it’s not the same show as Season One.

Season One of ST:TNG was a testbed season, a season where they had no real idea of where they were going, so they just tried stuff and hoped it worked out. It also had Gene Roddenberry firmly at the helm, and despite his failing health, he did his best to inject his vision of the future into the show.

So they gave a writer’s bible to a bunch of people, let them put together scripts, and then tried to weave that into a show while at the same time attempting to create a whole new world for their viewers. Nobody (except maybe Gene, to a point) knew exactly what they were producing, but they had a vague idea and they set forth in that direction to find out.

They just knew that they wanted to create the future, and so that’s what they did.

Take the male miniskirt for example. It’s an outfit which pops up regularly in the background as the civilian crew (remember them?) wander the ship during peacetime and rush everywhere during times of trouble. It’s weird. It’s probably uncomfortable to wear. (The extras probably drew straws to decide who would have to wear it.) And it’s one of those things people just look back on and go “what were they thinking?”

And yet, I would argue that it’s one of the best costume choices they made.

I say this exactly because it’s weird, or more appropriately it’s unique.

When viewers saw crew wandering around in those things, their natural reaction was “boy, these people are weird!” or to be more precise “these people are not us”.  In other words, it made life aboard the starship Enterprise 1701-D different from life here on 20th century Earth. It made their culture not our culture, and made their ideas of what was right and wrong not our ideas of what was right and wrong.

Yeah it was odd, yeah they got rid of it pretty quick (just like the rest of the civilian crew idea), but while it was there it served as a reminder that we were looking at an alien culture to our own. One which could be new and interesting for us to explore as we joined them on a journey through the universe and beyond.

It was touches like this that gave Season One of ST:TNG a sense of grandeur that I would argue that later seasons of the show (and subsequent series) actually lack. The ship was a big place populated by lots of people, people whose lives were affected by the decisions Picard made. The producers made an actual effort to make us feel their presence, and even included them in plots, because it made the ship feel bigger. It was a ship that had over 1000 people aboard, and they went out of their way to make us feel that this was the case.

And of course, it doesn’t just stop with the crew.

Partially thanks to the fact that the writers on the first season didn’t have a clear vision of who was who and the overall “feel” of the show, each episode comes across as it’s own unique little sci-fi adventure. The characters are rough, simple, and more types than people, but the plots are different and interesting because they’re all trying to present something new. (In a sense, each of the writers had a completely different setting in their heads when they wrote the scripts, and brought those different takes into the show without thinking about it.)

Did it always work? No. But, because they threw all these different stories together, it really created a sense that we were getting a view of this ship and setting from different angles. You literally never knew what would be around each corner (Not “gaseous anomaly 24,547…”) and each new encounter felt like you were being given a snapshot of a larger world. They did small plots about Picard trapped in an elevator, and large plots about Federation-wide conspiracies, and each of them made the show feel bigger, richer, and more complex.

If I had to sum up the first season of ST:TNG into a single word, that word would be “potential”, because when watching it you felt that anything was possible. It was an open playing field, and it felt like the producers were doing their best to take advantage of that field to give you the best show possible. They didn’t quite know what they were doing, but they tried hard, and I would say this season had a lot of heart put into it.

It wasn’t slick, it wasn’t polished, but it was earnest and it set the ground for what would come later on.

It went where no-one had gone before.

In a male miniskirt.