One of those odd bits of history that one comes across and finds interesting enough to note is the Chopine. I can just imagine what a scene in this period would have looked like with all these fashionable stilt-women wandering the marketplace. 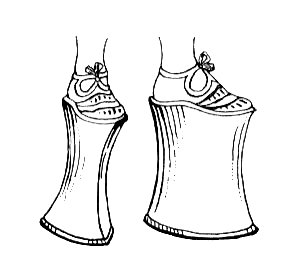 “A chopine is a type of women’s platform shoe that was popular in the 15th, 16th and 17th centuries. Chopines were originally used as a patten, clog, or overshoe to protect the shoes and dress from mud and street soil.

Chopines were popularly worn in Venice by both courtesans and patrician women from ca. 1400-1700. Besides their practical uses, the height of the chopine became a symbolic reference to the cultural and social standing of the wearer; the higher the chopine, the higher the status of the wearer. High chopines allowed a woman to literally and figuratively tower over others. During the Renaissance, chopines became an article of women’s fashion and were made increasingly taller; some extant examples are over 20 inches (50 cm) high. Shakespeare joked about the extreme height of the chopines in style in his day by using the word altitude (Hamlet 2.2, the prince greets one of the visiting players, – the adolescent boy who would have played the female parts in the all-male troupe – by noting how much “nearer to heaven” the lad had grown since he last saw him — “by the altitude of a chopine.”)”