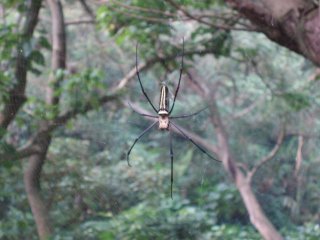 So, after a long hike and lots of Spiders that were either too small, too far away, or in too little light, on my way back I found this guy, who I shall call Mr. Googles, hanging right next to the roadway. (I took a slightly alterate road back, otherwise I would have found him on the way up and saved a lot of time!) It also took several pictures to get a good shot, there wasn’t quite enough light, and if the flash went off it made glowy and fuzzy. Now, imagine a forrest filled with thousands of these little guys, and you’ll understand why I tread carefully when I go offroad up in the mountains. Of course, they’re not interested in me, heck, the camera was less than a foot away when this picture was taken, and he didn’t even tense more than once during the whole photo session. What a pro! He should model for Spider Monthly! Poor guy only has six legs, though, but probably enough poison to make sure Rob is out for a week.