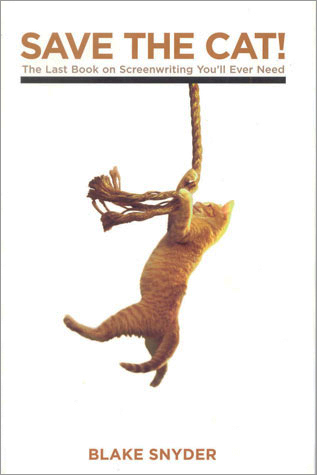 I think it’s good for writers to challenge themselves, it helps them grow.

Back in January of this year, I picked up an amazing book for (script)writers called Save the Cat! by scriptwriting guru Blake Snyder. I’d heard about it online, tracked down a copy at the local bookstore, and poured through it to discover it wasn’t as good as advertised it was better. So much better. (So if you haven’t read it and you’re a writer of fiction, go buy a copy- NOW!)

Among Snyder’s revelations was his theory that all movies can be broken down into ten different types, and that when writing a story, a writer should have one of these types in mind to know what exactly it is they’re writing.  This makes a lot of sense when you consider that most movies are only about 110 minutes long, at a minute of film per page of script. 110 pages of script isn’t a lot of time to work with when you actually get into it, so stories of movies must be concise and focussed or you get an unfocussed mess.

When I started to think through his list, I both agreed with it, and found it quite liberating. What he’d done was not just condense standard types of movie stories, but also stories in general, and each of them caused ideas for stories to pop into my head. While they might be a little simplistic for novel plots (or maybe not), these seemed to work especially well for short stories.

So, having just finished The Inuyama Rebellion fiction serial over on my Kung Fu Action Theatre site, and looking for more content to keep the site active, I decided to set myself a little creative challenge. Of course, there had to be rules, which were:

2)      I would make all the stories Flash Fiction: 1000 words or less in length, since I was at the start of what looked to be a very busy semester.  This was an added challenge to me because I had very rarely written such short fiction (most of my stories tend to be around 7,000-10,000 words long) and didn’t think I was very good at it.

I also decided that I needed a unified theme, so I dusted off a character idea I’d had about a young First Nations girl in New France adopted and raised by a former Musketeer and decided to use that as the focus. Of course, this meant I was adding both historical research and language issues (Je ne parle pas francais!) to the challenge, but I decided since it was flash fiction it would be light on the details anyways so I could fudge it as needed. (HA!)

And then, on top of that, a few weeks after I started the project, I got into the DAZ Studio 3D art program, and decided that I should incorporate 3D art into the challenge as well as a way to teach myself DAZ. This required slowly buying up the elements I needed for different scenes, and then composing them into something that worked with the characters and stories. A whole huge challenge unto itself!

5)      Generate 3D art to go with each story using a new art program I barely knew how to work.

As you can tell, I like my challenges easy.

I decided to call it The Fox Cycle (as in, a cycle of stories, not a fox on a motorcycle) and posted the first one at the end of January with the intent of posting a new one every Monday for ten weeks.

Well, I didn’t quite pull off the one-a-week schedule for many reasons I won’t bother to go into, but this week I posted the tenth and final story in the cycle

You can judge for yourself how it all turned out. From my side, I think some of the stories came out really well, while others are just so-so. I consistently impressed myself with my own ability to both condense the stories down to 1000 words, and to keep each one interesting and different from the others.  I was also surprised how much humor leaked into the stories.

I learned a lot about the characters, which grew organically as I wrote each story, and the setting grew as well. I’d hoped to use this project to explore and develop this story and setting for other larger future projects, and it worked beyond my expectations. I now have a very firm idea of my characters and the world they live in, one which I couldn’t possibly fit into the small space of the cycle, but which I hope to explore in the near future with other, longer works.

My own writing skills have also improved as a result of being forced to write such short, tight prose. It was a challenge at first, but now that I’m used to it I wonder why my other stories tended to be so long! I’d say this challenge has really helped me in thinking through my own personal writing style by forcing me to keep words to a minimum, and it’s also made me rethink how I frame the stories I write.

On the art side, I’ve learned how to master the basics of both DAZ Studio 4.0 and GiMP because of this project, and I’m quite happy with how some of the art turned out. I’ve never considered myself a visual artist, and still don’t, but I have started to gain a deeper understanding of how a picture is composed, the importance of lighting, and how much work it takes to make a good picture.

Would I do it again?

It’s one of those artistic challenges that’s good to go through as a rite of passage, but I’m not sure I’m going to be interested in doing it again anytime soon. It was a great way to develop this new setting to write in, and force myself to learn, so I might give it another go at some point in the future. It’s definitely a challenge that I’d recommend to someone else to try, although you might want to drop the visual art element and just focus on the writing and characters.

For those familiar with Blake Snyder’s Ten Types and who wonder how my stories correspond to them, here’s the breakdown:

I leave it you, my readers, to decide the degree to which I failed or succeeded in living up to each of the different types. I think I hit a few dead-on, and came close with a few others. My favorites of the set are Eyes of a Warrior, The Bodyguard, Rennie’s Wedding, and Hero. The ones I’m not quite as happy with are The Musketeer, Identity and Home.